I love photography. The art and the craft of capturing that moment when the light is just right and shifting one or two feet to the right or left improves the composition. Once you have determined that you want to take a photo, and you have refined the shot in your mind, you have a lock on your target and you fire the shutter.

There is no substitute for good technique, and while modern digital equipment and methods give us a lot, they also invariably take more away. By giving us the ability to tweak to our hearts content in post processing, the focus which was required at the front end of film photography is gone.

We erroneously believe that we can magic up light and dark, and crop to our hearts content to produce the perfect image from any old crappy snap. Sadly, it’s just not true. Garbage in = Garbage out, or to put it more bluntly, you can’t polish a turd.

If you are in the business of producing graphic art, Photoshop and Lightroom can take an image and make it look out of this world. But is it photography? There are some photographers out there who take a pretty normal scene and turn it (through the power of HDR and PP) into something which looks unreal.

One example is Trey Ratcliff. Trey is a proponent of HDR. I think Trey Lives in New Zealand (an idea place for a landscape photographer). I like some of Trey’s photos more than others. Some of his HDR shots come out looking a bit odd (have a look at his portfolio here), and certainly not what I would call natural or realistic, the colours are super saturated and the photos can come across as a bit ‘blotchy’ for want of a better word. They are certainly striking. Whether you like them is a matter of personal taste.

Here’s one of Trey’s shots of the Great Wall which I rather like: 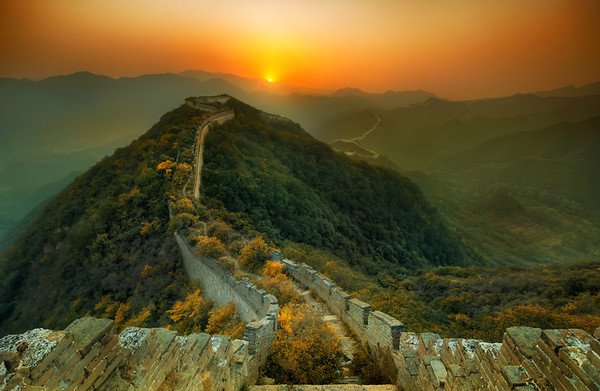 I recently went to the Wildlife Photographer of the Year exhibition at Nature in Art (just outside Cheltenham). The photos were amazing in their representation, but there was no doubt that the majority were heavily edited. My girlfriend wasn’t impressed. ‘Anyone can make a photo look good with that amount of retouching’. Her feeling was that the photographer’s skill lies in making the image using the actual scene in front of them, not conjuring up some post processing FX to give it visual appeal. I would question whether a lot of those photographs were what the photographer actually saw at the time.

All of which leads me to the headline of this post. Why is it that photographers like Ed from photouniverse are raving about Fuji X system cameras?

It’s for the same reason that these people shoot film; some photographers want to be photographers and not photo retouchers. Ed appreciates Fujifilm X-system digital cameras, X-Pro1, X-E2 and X100s, and rates the jpg’s which come straight out of the camera. So what? Well, for those of us who don’t want to spend hours sat in front of Photoshop or Lightroom, the quality of the original image is what matters and in this regard Fujifilm excels.

Fujifilm has been in the photographic film business for many years. They understand the processing side of the imaging business. Because of this, they also understand colour better than anyone else making cameras today (Kodak doesn’t count). Do the other guys; Nikon, Canon, Pentax, Olympus, Panasonic, Sony, make film? With film photography, the camera is just a lens. You buy good quality film and have it processed properly, and the real magic is there in the film.

But with digital cameras, the camera has become the lab. Or at least it can be the lab, if you want it to be. If you choose to shoot RAW, you can get Photoshop to be the lab for you, but you’re going to have to be the technician. Some cameras are better ‘labs’ than others.

So Fujifilm cameras process your images for you, ‘in camera’ to Fujifilm standards, including their film simulation modes, and give you something great straight out of the camera. By all means tweak, but wouldn’t you rather start with something decent than something dull and lifeless?

Classic Chrome is a case in point. Designed at the request of professional photographers, the Classic Chrome setting comes on the new X100T, and will be retrofitted via firmware upgrades to the X-T1. I don’t whether the whole Fujifilm X-system will be able to have Classic Chrome retrofitted, but we’ll see. Fuji has quite a way of upgrading their cameras after the fact with firmware updates.

If you like good images, does it really matter how you get them? Wouldn’t you rather have something that looks great straight out of the camera than have to spend hours trying to make it look reasonable in post? My images get minor tweaks only in Lightroom, and then only really for exposure and contrast settings, not for colour.

Speaking of Fujifilm, at the moment the Fujifilm X-Pro1 is available for £700 with a free 18mm and 27mm lens

in the UK. This has to be the bargain of the century! Or you can get a new body for £470, nearly a grand less than the original RRP!

Here’s Ed telling us all why he’s a big fan of the ‘magic pixie dust’ that the boys at Fujifilm have in abundance. Go tell em Ed!